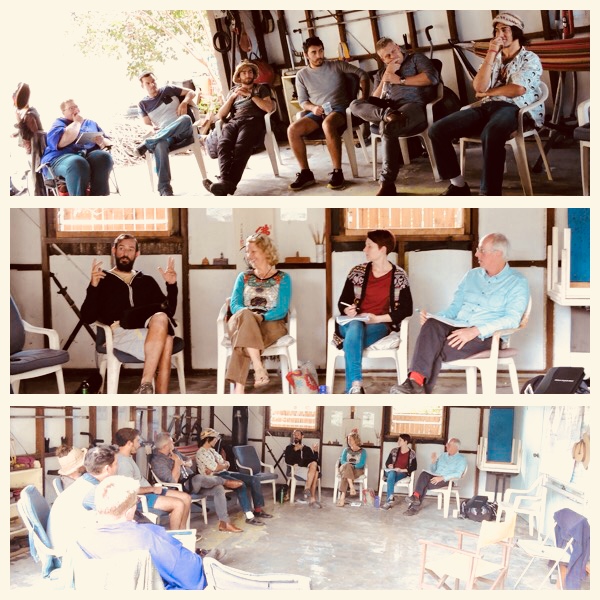 A place where farmers, chefs and advocates came together to discuss local food systems.

Earlier in the year, I had the pleasure of attending a gathering of urban farmers from across South East Queensland (SEQ), in my hometown of Brisbane.

It was a fantastic opportunity to meet and hear from a number of farmers growing food in Brisbane and the surrounding suburbs. If you?re anything like me, when you think of food production, you don?t tend to think of big cities. But what I realised as I sat there listening to everyone?s stories, is that local food and the benefits it brings, may be more accessible than you think. I want to introduce you to the wonderful farmers and chef, who were present that day.

The event was coordinated and hosted by Green Dean Urban Farmer. Dean has been involved in the urban farming movement for over 10 years. He has a wealth of knowledge on permaculture, urban farming, soil care, organic edible gardening, keeping chickens, worm farming, creating biodiversity, cooking, nutrition, food?sustainability, community resilience and much more. His passion lies in educating and consulting in these areas and supporting communities and individuals in setting up their own urban farms in SEQ. Dean has founded numerous projects over the years, including Green Dean?s Crop Swaps, The KFC Project (2012-2017), Australian Kimchi Appreciation Society (AKAS), Fermental As Anything and many more.

Higgledy-Piggledy Farm is a quarter acre farm 14 kilometres from the city in Eight Mile Plains. Rell and Viv grow chemical free, seasonal vegetables using permaculture principles in the backyard of their suburban home. They have free-range chickens, ducks and quails, and distribute to customers within a 10-kilometre radius of the farm. Utilising nearly every spare patch of soil, it?s very impressive what Rell and Viv produce in such a small space.

River Soil Organics is a three quarter acre farm near the river in Oxley, farmed by Micah and Matt. They sell direct to the community through farm gate sales on Friday afternoons from 2.30pm onwards, at 110 Clivedon Avenue. If you live locally be sure to get in quick because they always sell out. The organic produce is picked the day before and sold 100 metres from the farm at affordable prices, comparable to the leading supermarkets. They also sell to two buyers group, including one in Oxley, which is The Edible Suburb Project.

The Mini Farm Project is a not for profit permaculture farming organisation that grows food for those in need using garden pods in under-utilised spaces across Brisbane. It has two active sites; one in Camp Hill, their flagship site, which is land shared by Timber Tots Child Care and sponsored by Wine & Dine?m Catering, and another site at Woolloongabba.?? They also have an additional inactive site with a chicken farmer south of Beaudesert, on a land share contract for 30 acres for 10 years. 15 acres is planned to be converted to donation crops and 15 acres is planned to be for cash crops to self fund the project. During its testing phase, The Mini Farm Project harvested 94 kg of produce from Camp Hill, which has been used in the meals provided at a homeless shelter at Caboolture.

Millen Farm is on 2500 square metres in Samford Valley, which is 30 minutes from Brisbane CBD.?? It?s a not for profit organisation that has been founded, established and managed by the community, for the community. Arran is the farmer at Millen Farm, which produces organic, sustainable produce sold within the local community. They also run workshops, including how to compost, build an Australian bee box, and permaculture design in practice.

Peter Kearney from My Food Garden spoke about a number of exciting projects he?s been involved with, providing advice to developers on urban farming projects. Peter has numerous years experience and delivers a range of services including mentoring, urban agriculture consulting, educational workshops on a wide variety of topics, such as organic gardening and biodynamic methods. He also supports people interested in building their own backyard or community garden. Peter is delivering a talk on biodynamic gardening at the Relaxation Centre of Queensland on Friday 27 October.

Forkhay City Farms is a not for profit backyard based urban farming project in Bulimba coordinated by James Blyth. This initiative is still in its infancy and slowly gaining momentum. Excitingly, James is also leading on the Stephanie Alexander Kitchen Garden project at a local school and supporting children to grow their own food sustainably, which they then use in the kitchen to cook with.

Lui Varney is an aspiring urban farmer setting up a new farm in a backyard in Coopers Plains on a quarter acre. He plans to grow a range of seasonable vegetables and sell direct to the public at markets in Chillingham and in Brisbane.

Jerome Dalton from Dalton Hospitality Bespoke Catering and Events was also present and spoke about the catering and consulting services the company provides for functions and events in Brisbane. As a chef, he was extremely interested in sourcing more local food and was eager to understand and overcome, the logistics and practicalities of using smaller farms when planning menus for large numbers.

It?s really exciting to see so many urban farms in Brisbane and the outer suburbs, and this list is by no means complete. There are enormous benefits with growing food locally, and investing in urban farms is something we need to be advocating for at a local, state and national level.

The reason for this is that small-scale farms grow food in a way that nurtures and protects the land. This promotes soil health and improves biodiversity. There is minimal if any waste, since it is all composted back into the earth and reinvested back into the soil. Thus, there is less emissions and energy associated with the food, and the food miles are generally minimal.

The environmental benefits are great but there are also enormous social benefits. Many of the farmers sell their produce direct to the community. This local food economy has been shown to increase connection with consumers and the source of their food. It promotes transparency because consumers know exactly where their food comes from. It facilitates social connectedness between farmers and consumers benefiting all.

Other benefits include eating food that?s full of nutrients and flavour, and in season. Locally produced food can also improve the availability and access of affordable and healthy fruit and vegetables, for people who are food insecure.

For those of you who live in an urban area, I encourage you to find out where you?re nearest farm and farmer is. As I said earlier, it may be closer than you think.

We use cookies on our website to give you the most relevant experience by remembering your preferences and repeat visits. By clicking “Accept”, you consent to the use of ALL the cookies.
Cookie settingsACCEPT
Manage consent