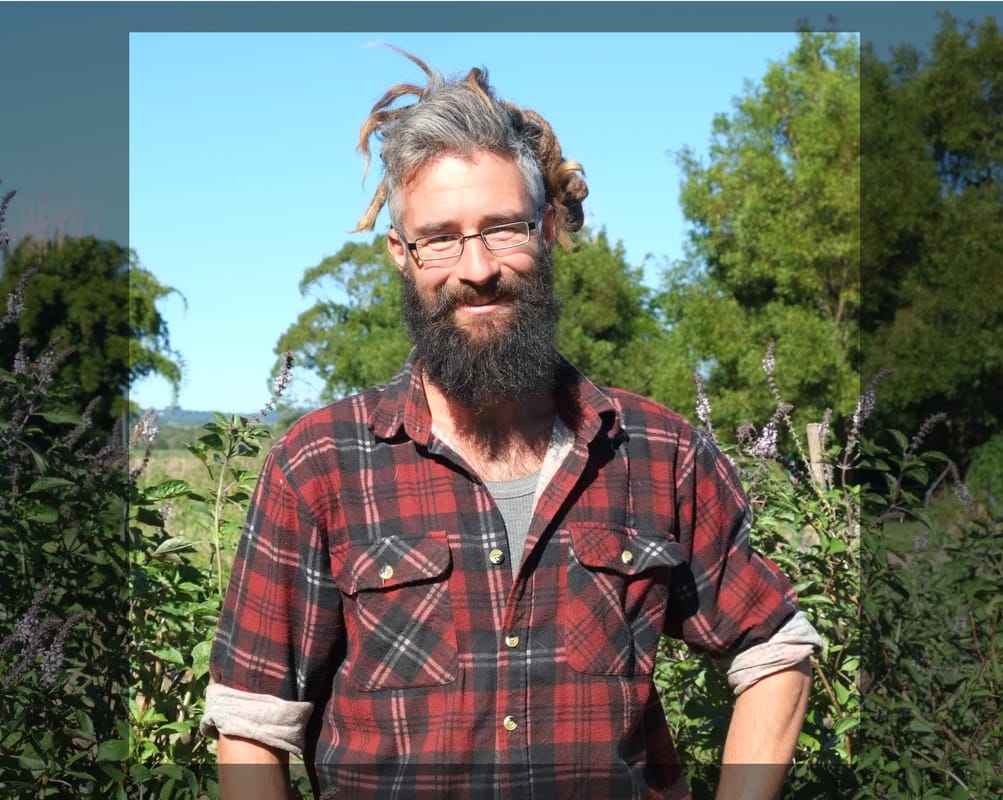 What started out as an aspiration to be self sufficient, has evolved into a vision to grow and support young farmers into a profession that has enormous reward, alongside huge risk, immense challenges and a great deal of fulfillment. What?s more Joel can see the future in small-scale farming and has a vision for how we can shift to sustainable farming practices and develop local food systems, challenging the predominant industrialised model of agriculture.

With a name like Orchard perhaps he was destined to be connected deeply to the earth because his roots run deep. Joel grew up in a farming community in southern Victoria and worked on dairy farms in his youth. Despite these early connections to farming, he first started growing his own food while studying in Melbourne. His desire to grow enough food for himself and generate his own nourishment, led him on a journey up the east coast in search of enough land to make a livelihood out of it.

There were few opportunities for a young farmer wanting to start from scratch. He encountered numerous barriers including the significant capital to buy land and equipment, along with limited entry points for someone with no farming background and limited experience.

Now Joel rents one and a half acres at Mullumbimby Community Gardens, where he has a small scale diversified farm, harvesting a range of crops with up to 12-15 vegetable lines growing at a particular time. He does this alongside managing a beehive, making liquid fertilisers from the worm farms; minimising waste by using food scraps from a nearby organic retailer and is currently putting together a solar powered aquaponic system to sustain his off-grid farm. He had a flourishing Community Supported Agriculture scheme established with regular subscribers, gratified with the fruits of his labour. Sadly, after the torrential downpour the region experienced in April, his entire farm was completely submerged by water, which meant starting over, just when things were going well.

Truly a farmer?s worst nightmare, yet sadly a harsh reality that our famers face. Our weather is unpredictable and it?s been documented that Australia is set to experience even more extreme weather events as we face the uncertainties that climate change brings. This is even more reason for encouraging and supporting sustainable agriculture, also known as agroecology.

Running a small scale farm is nonetheless, just one hat that Joel wears at present. Recognising that the average age of farmers in Australia exceeds 56, the need to support new young farmers into farming is essential.

“Nothing is being done to stimulate or support young people to get into food production to support a rapidly growing population. I really want to be setting a framework in that they will operate in. Dynamic and diverse agricultural enterprises can respond to deal with climate change, another huge thing for young farmers.?

This is why Joel has established Future Feeders which provides young people wanting to get into farming with opportunities to learn. Partnering with a local training institute, alongside providing the land, equipment and established crops, Joel is giving interns an opportunity for collective skill development, minus the enormous barriers he faced when entering small scale farming.

This has also led to the formation of the Northern Rivers Young Farmers Alliance to facilitate peer support for young farmers in the area. This is a network of farmers under 40 who share the same values in ecological agriculture and sustainable land management. Joel praises the alliance, acknowledging there are ?enormous benefits for a support network, however one challenge is that when farmers are already stretched to thin, it?s hard to find time to be involved in a food movement.? Despite these challenges, the group meets monthly and provides fantastic opportunities for support, collaboration and networking.

When asked about his five-year vision Joel would love to see small-scale farms in his local area form a collaborative farming network. Reflecting on the economic inefficiencies of small-scale farms Joel aspires to see ?a range of emerging farmers form as a cooperative. Efficiencies go up because they become part of a bigger farm on the books, but they still benefit from being able to explore farming at their own autonomy.? It?s clear he?s given this a lot of thought because Joel states ?through making the farm look bigger under a collective identify, it provides enormous benefits such as increased buying power for various inputs, as well as increasing efficiencies for distribution through accessing bigger markets. A network has a lot of advantages instead of doing all of that at the same time.?

When asked what consumers can do if they want to support a fairer food system, Joel imparted three wise words ?know your farmer.? He emphasised how this makes it more real for the farmer and more authentic for the consumer. You can do this through farmers markets or by checking out local Community Supported Agriculture (CSA) models in your area. Joel praises the CSA model because it shares the risk between both the farmer and consumer.

?Another reality for farmers is that they get left holding all the risk – whether the crops succeed or fail, or whether the market changes. In a CSA model, customers become shareholders; stakeholders in the farm itself and the risk is distributed. Everyone benefits when the system is working really well. Everyone shares the load when things don?t go well such as natural disasters or pests.?

As our conversation nears a close, I am left feeling hugely inspired by Joel?s big future thinking. A farmer, activist and connector, Joel is harvesting the seeds for change, cultivating the youth of today to enter the most important job ever required.?? A profession that cares and nurtures the land, alongside the greatest responsibility of all, feeding us.