From total novice gardener to knowing a bit more ? Part 2 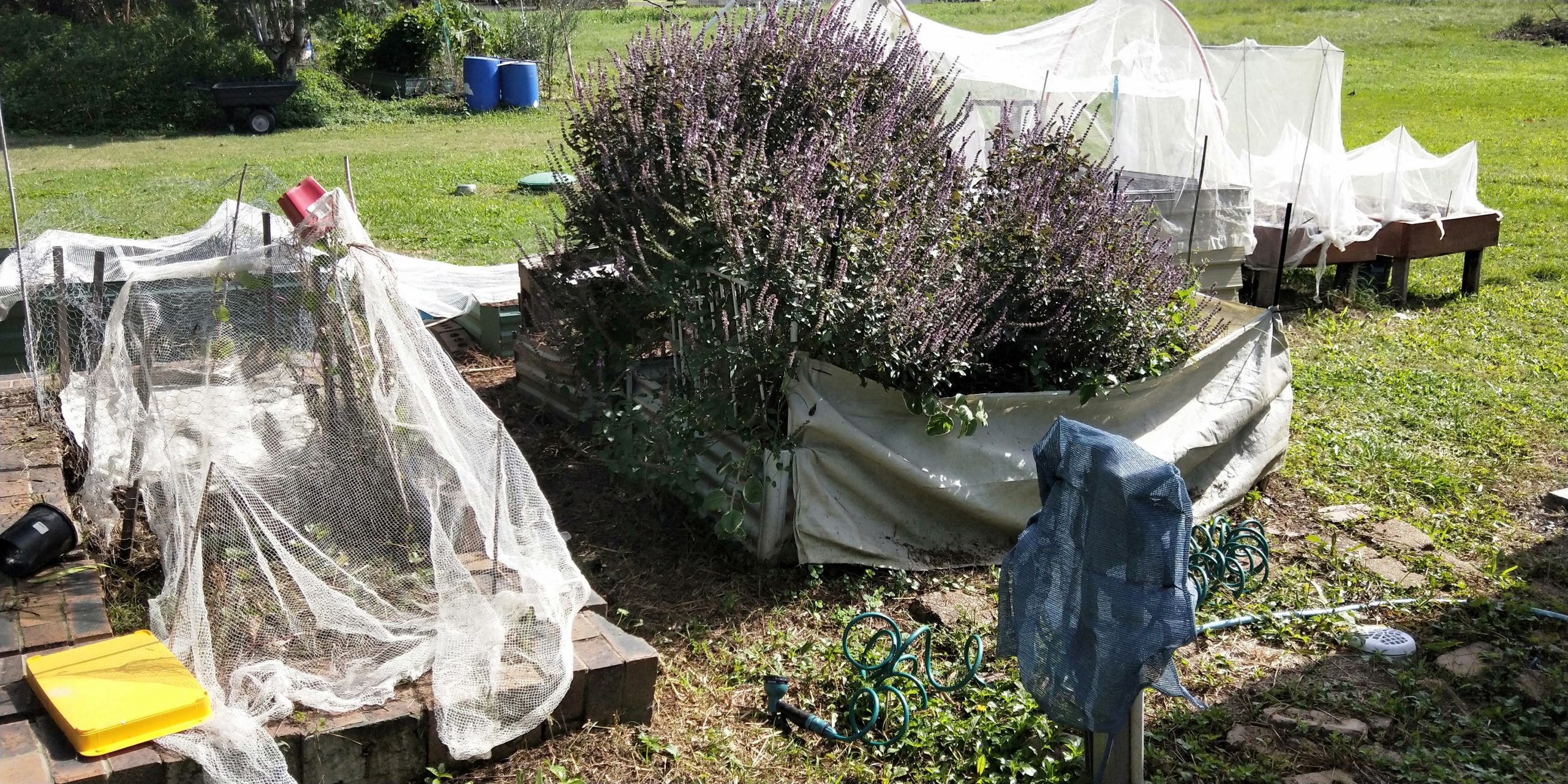 This blog post is a continuation of Lyn Donnelly’s story of her two year journey from someone who knew very little about gardening, to now having her own thriving backyard veggie patch. You can read part 1 of her story here.

As food citizens, there are many ways in which we can become more informed and empowered to create the change locally that we need for a healthier, sustainable and fairer food system, and Lyn?s story is beautiful example of this. If you want to be part of a growing community of active food citizens we would love to see you in the Food Citizens Unite group ? Kylie x

So then onto creating new beds on the cheap?.I found a guy on Gumtree selling metal fence panels for $5 each, different colours and a bit scratched ?who cares when they will end up as garden beds.  I visited Bunnings and asked if I could have some offcut wood that had been collected in buckets which they happily gave me for free.  I used these to act as corners to screw the metal sheets to.  I cut some panels into half to make a lower bed but also had a high bed, and once again it was the worry of the cost to fill them.  That?s when I discovered the h?gelkultur garden beds method.  We have trees all around us and the kids had been busy tidying and cutting back stuff, so I half filled the metre high bed with tree branches and debris, grass cuttings, weeds, you name it, in it went.  I had got friendly with our neighbours by this time and they have two horses.  Each day the poop would be scooped up and deposited in a pile at the end of their paddock.  I asked if they sold the manure, they said they used to when their kids were young but it was too much bother now.  I asked if I could buy some, and was told take as much as you want.  That was a fantastic offer.  I could now chuck on a layer of horse manure between the weeds and the grass to help the enrichment of the soil breakdown.

During my googling I came across a youtuber called Mark from Self Sufficient Me.  He has a smallholding in SE QLD which meant his experience could be related to what I was trying to do.  I had discovered information about permaculture, no dig gardens and food orchards.  I had told our son I was going to turn his paddock into a food forest, but he was none to keen.  Anyway, I heard Mark talk about the fruit trees you wished you had, were the ones you should have planted 10 years ago.  It struck a chord with me so I checked out what grew on his property and worked out what I could trees I could afford to purchase.  I started with 2 dwarf apples trees from Daleys Nursery in Kyogle.  Then I got busy to create an orchard strip on the other side of the paddock , away from the water stand and where the soil was not great.  I did initially dig up the area but in hindsight I should have covered the bed with cardboard and covered it with garden debris, but was too impatient.  I did order some more soil, carted up wheelbarrows of horse poo, used sugar cane to improve the soil content.  I planted it up with perennials like Yakon and Passionfruit and haunted the bargain shelf at Bunnings for interesting and useful fruit trees, along with ads on Gumtree for local home growers offering young trees.  I then interplanted the spaces with melon, and pumpkin and sweet potato with varying success rates.  I finally had success getting a couple of pomegranate seeds to germinate, taking them on short camping trips when we went away to nurse them through.  I had also planted the area behind with corn which did really well, but when I went to harvest the cobs they had been decimated by bandicoots?I think?anyway open the cob and no corn was left, it had been eaten.  We have battled against bats and crows and had set up green nylon netting over the trees but it does not perform very well ? the net size was too small to let passionfruit vines or pumpkin grow through it so it tended to strangle plants.  We also found a carpet python entangled in the edges so had to carefully cut it free.  I removed it after that.

In between all of this my husband retired in October 2018 and throughout 2019 we were away in the caravan a lot so had to choose hardy plants which did not need too much care, Kristy was juggling three children by this time and I did not want to add to her burdens

Having Patrick home was great for pallet collection services and banging in picket posts to create fence lines against the chickens.  We did source some hard wood pallets free and used them to create a 2 bay compost heap, using an old security door as the back which would let air through the pile.  I had used the security door originally to create a plastic bottle garden.  It was a total failure with water not flowing through the bottles and the heat baking the plants in the plastic?google made it look so easy.  We have had good success with some crops, like Chinese greens which seem to grow way more abundantly than spinach, had some oops moments when we planted biannual broccoli which grew huge and we had no room to plant a crop for the current year, and we had to pull out and compost, mixed cabbage and cauliflower due to chicken scratches but then as we went to harvest they were full of caterpillars?.sigh.  We have had abundance of tomatoes and I have learnt to make quick chutney, and rain events which killed the tomato plants while the fruit was green, so discovered various recipes which use green tomato?my favourite is a green tomato bread.  We have had no trouble growing climbing beans, black beans, kidney beans, and yellow bush beans and of course the wonderful snow pea.

Sadly we don?t have any chickens at the moment so I don?t have to protect every bed with wire.  I think the next set of chickens will be confined to a run to keep them safe, they are cheeky and full of character and the eggs are to die for

We were due to go on a four month road trip to WA in January and I started to plan how the garden should be managed while we were away, we decided to leave the fruit orchard to Kristy to water as required but put all the other garden beds to sleep.  It was just as the terrible bushfires were blazing down the east coast and we had noticed huge piles of pine needles and cones all around the perimeter of the property.  We felt we needed to clear these as they were a fire risk, but the bonus was we could use it as a mulch on top on the beds which had now been cleared and to top the orchard area which now had an olive tree, guavas, fig, jackfruit, passionfruit, pomegranate, raspberry, ginger, yakon and some pumpkins still surviving.

One week after leaving for our trip the paddock, which has an easement running down the side which runs to a pond and a creek, flooded as it had done each previous year.  The water ran over the orchard area, but as quickly as it floods it also subsides albeit leaving a massive amount of debris all over the paddock.  Due to Covid-19 we returned early, we have set all the garden bed for this year?s growth, as the pine needle mulch had certainly done its job and rotted down well in only 70 days.  There was also piles of rotting leaf mulch in various piles which the kids had racked up.  It made a great top dressing, and now I have planted up for this season.

Its difficult to estimate how much we have spent to set up our food production garden but on the whole, I have purchased cheaply second hand, got some great bargains on eBay, and YouTube is an amazing free resource to learn from.  The biggest input has been time, but as a retiree I have plenty, even though we have many other interests and commitments too.  Our grandchildren are interested in what we have been doing and help plant seeds and harvest product so we are hoping they have a life long interest.  I go out every morning to check the gardens, get excited when I see new shoots, worry when I see the arrival of the grasshoppers, get confused which ladybug is the evil one, chat to the resident magpie families and kookaburras,  marvel at the acrobatics of the finches and wagtails, and welcome new ducklings each year into the paddock, wish the bats weren?t so good at identifying ripe fruit, and have serious go away chats to the crows.  It?s a good life, an abundant life, one we are truly lucky to experience.