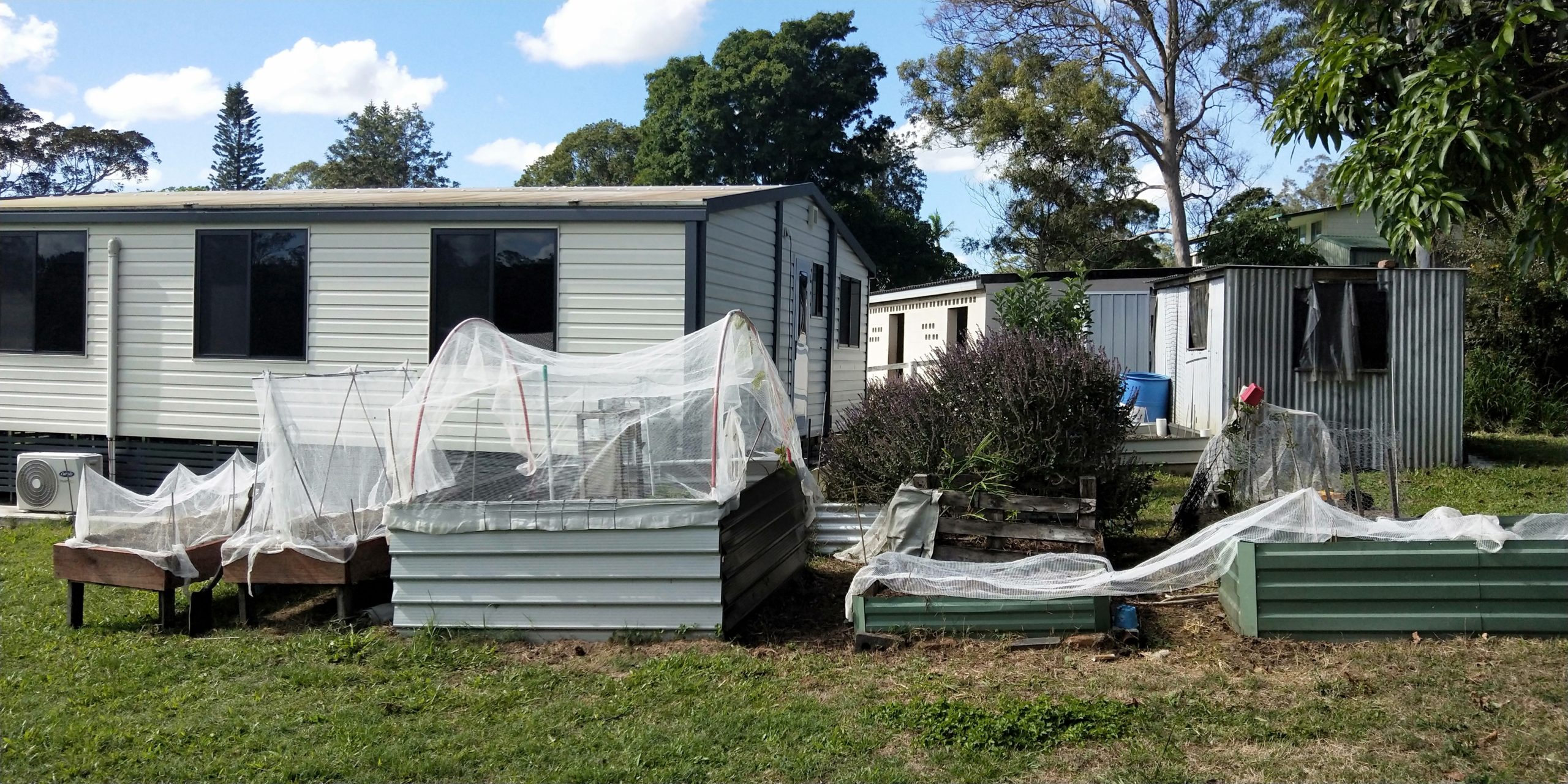 I am honoured to be able to share this guest post with you, documenting a two year journey from someone who knew very little about gardening, to now having her own thriving backyard veggie patch. Lyn Donnelly has kindly documented her experience in a two-part series which I will share with you over the next two weeks.

As food citizens, there are many ways in which we can become more informed and empowered to create the change locally that we need for a healthier, sustainable and fairer food system, and Lyn’s story is beautiful example of this. If you want to be part of a growing community of active food citizens we would love to see you in the Food Citizens Unite group – Kylie x

In 2017 my husband Patrick and I were considering downsizing from our beachside apartment to a small block of land to put up a shed and house our caravan.  I had undergone open heart surgery the year before which turned into a bigger deal than we had initially thought, and I took the decision to retire.  We consequently had to rethink our finances.  Fortunately, we had trauma insurance which paid out on my operation and I was also old enough to draw on my superannuation fund.

While we were exploring our options, our son Ben and his wife Kristy, purchased a an old 70’s style ranch-house on one acre of flattish paddock on the outskirts of the Gold Coast.  The house and garden would need a great deal of work done due to the original owners being quite elderly when they sold.  We had a look around and were delighted when the kids suggested that we put our cabin on the back paddock when we were ready to retire.  They said “look, you can have your own place, go off in your caravan, and we will look after you when you are old”.  We have always been heavily involved with their two children, having each child one day a week since they were little so we jumped at the chance.

The next six months were hectic, finding a home that would be compliant on the land and a building we could move, if anyone’s circumstances changed was a challenge, but we found a local firm who made a home that was classed as a caravan – was built on a wheeled trailer, and could be moved if required and was covered by local and federal bylaws.  We used a great company called FoldHome. We sold our apartment, moved onto the paddock in our caravan while our home was being built, arranged a concrete slab, and a new septic system to accommodate our needs along with our Ben and his family.

We were all set up and living in our new home two days before Christmas 2017 and it was at this point that I turned my attention to growing vegetables.  We had bought a second hand metal garden bed as house warming gift for Ben and Kristy when they bought the house…. they rightly thought it was way to early for them to turn their very little spare time to growing veg.  Their family were about to increase to five, the house needed extensive reno and the garden area was chaotic.  So, I asked if I could plant up the bed.

That first bed was 2x1x0.5 metres in size and when I started to look at YouTube for how many plants fit in that size of bed, I realised I was going to need way more room.  Now came the delicate negotiations with the family, after all this was not our land and we were guests on it.  I suggested I would need a bit more room to grow stuff and the family said go for it, but it was to be my responsibility and be mindful about their outlook from their house, and where the kids were likely to play.  When we had decided on the location of our home, we had set up a water and power stand behind it to supply us and as the water was there, it seemed sensible to set up the veggie beds around the side and back of our house.  It got at least 6 hours of direct sunlight a day and gentle shade in the morning and late afternoon.

Now I have never grown veggies, the only experience I have of plants was in the UK and basic garden variety kind, nothing exotic.  I needed to learn some skills fast, so I googled everything, what soil to buy, how to lay a garden bed up, what tools I needed, germination calendar’s, the list seemed endless.

I searched Gumtree and found two smaller garden beds for sale 1×0.8×0.5 for $10 for them both, collected them, visited our local landscape business and discussed with them what soil to use and how much.  The paddock has a clay base around our cabin and the previous owner had top filled the back half acre with clean fill to raise the levels so I knew the soil around us was fairly barren.  We agreed on spent mushroom compost and some organic fertiliser.  I did not at that time know anything about permaculture or hügelkultur garden beds.  It was duly delivered and I set too filling them up.  My husband was still working at this time, and along with the garden beds I worked everyday raking the area around the cabin and the middle of the kids garden to get it back to grass after all the lorries needed to lay the concrete slab and install the sewer system but that is another story.

I bought my first lot of seeds from Bunnings the usual, tomatoes, lettuce, carrots, spinach but soon realised seed packets are really expensive.  I turned to eBay to investigate better prices and found great bargains where you get a full spring, summer or autumn collection for under $20 free postage.

My first three beds were sown and a week later germinated, every day I would go out to inspect progress and on the second week when I did my inspection every little seedling had been munched….I hadn’t even thought about net coverings, I thought snails or slugs, so more googling to find a myriad of solutions with various price tags.  Lesson learnt, new seeds sown covered with netting and we soon stated to get results.

The family got themselves some chicken chicks at Easter 2018 which meant I now had to chicken proof all my garden beds so I bought the cheapest chicken wire and bamboo stakes to build barriers to keep them out.  It was a bit of who dares win really, and mostly they won getting into garden beds and scratching up seedlings.  In the end we settled into a good rhythm and they got rewarded for staying away with plenty of broccoli leaves.

I searched for free stuff, pallets were top of the list and once I found a supply I set off to collect a couple….right…pallets even the plywood ones are heavy, I had to appeal to the good nature of the guys who were giving them away to load two onto my car…..no way I could heave them onto the roofrack, and when I got home luckily our son was working from home and helped me take them off.  He said “what are you going to use them for”, and I just said “not sure but I am sure they will come in handy”.  In the end I cut them into portions and used the sides to stake tomatoes too and use as a barrier to the chickens.  These initial pallets were the pressed plywood type, they only last in the garden for about a year and when they start falling apart I break them up and put them into the compost pile.

Composting has also been a long journey of learning.  We as two household have plenty of food scraps and veggie peelings.  Our first attempt at using a black plastic compost tower was not great, a wet slimy fly ridden mess, but google came to our aid, lots of grass clippings, the one acres of mowing produces heaps of gras clippings.  I am a member of the ShareWaste community and occasionally get some compost contributions.  Not enough people know about the app so am thinking about putting a black bin outside the property and a sign.  Again I have to be mindful this is not our property and I can see Ben and Kristy might not want strangers wandering around on the property and currently with social distancing there are a whole lot of other concerns.

I’m really interested in creating transformational food systems change. I believe that we, as citizens, have the power to create the food system we want. One that nourishes and sustains both our bodies, and our planet. Here at Our Food System, I will give you the know-how to do just that.