Connecting the dots on a joined up food policy 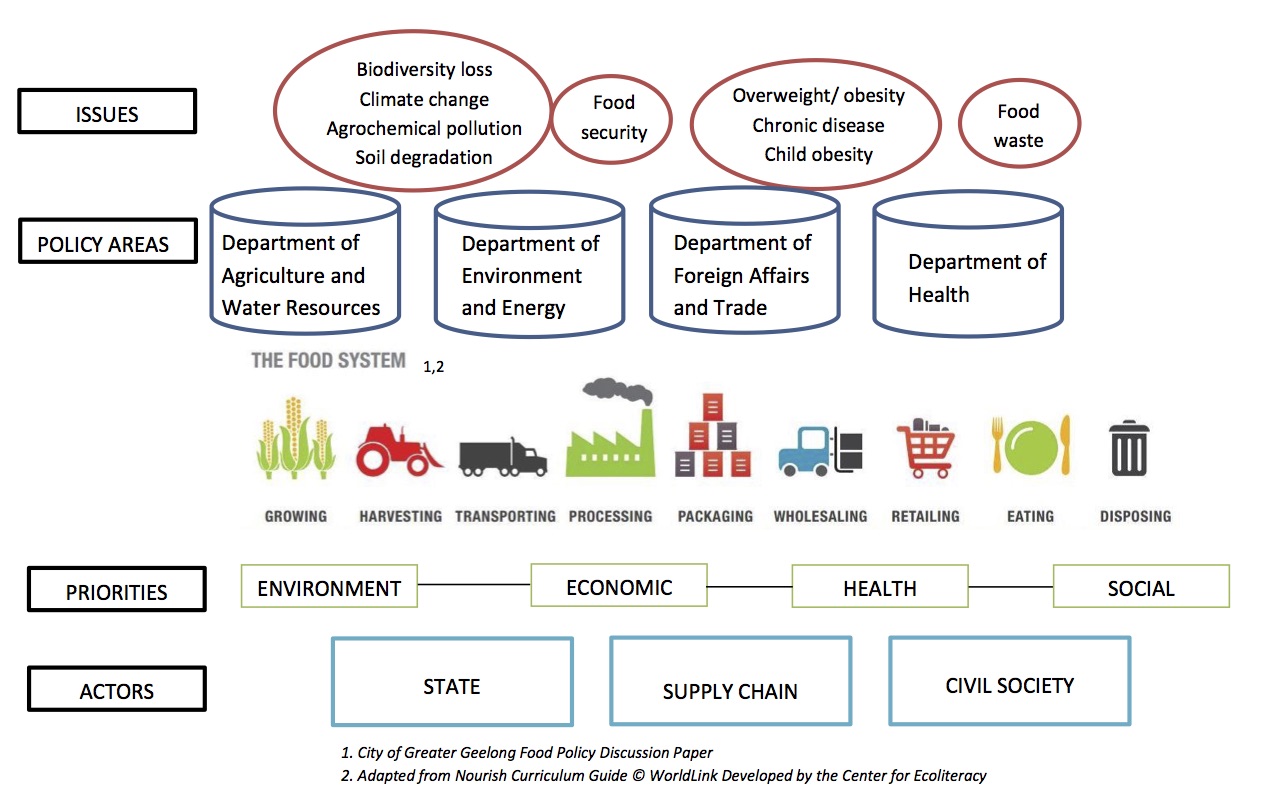 There have been many calls to action in the past few months for integrated food policy. Harvard has just released a Blueprint for National Food Strategy, which provides a plan for action for creating a national food strategy in the US. The International Panel of Experts on Sustainable Food Systems are undertaking a three year process of research, reflection and citizen engagement to determine what a Common Food Policy looks like in the EU.

So what is a joined up food policy? Why do I care about it? And why should we have one? You see the thing with food policy is that it affects us all. Our survival depends on food and for this reason it?s integral that we have policies in place that preserve that survival. The challenge is that food policy is not solely concerned with ensuring we all have safe and adequate food available to us at an affordable price. If it was, then the food policies we have currently are sufficiently doing their job because most of us in Australia are food secure and have access to plentiful food which is reasonably priced. (Note: while the majority of Australian?s may experience a high level of food security, one in twenty adults reported they had gone without food in the previous 12 months at the time of the last national health survey, and one in five Aboriginal and Torres Strait Islander people experienced food insecurity in 2012-13).

Yet consumption is only one piece of the pie. As you can see above, the food system comprises every process from ?paddock to plate? or ?farm to fork?. Therefore food policy is concerned with policies that affect production, processing, transport, trade, consumption and waste.

One of the great challenges is that the government departments who are responsible for policies to do with food sit in silos independently of each other and have their own policy priorities. The Department of Agriculture and Water Resources develops and implements policies that foster competitive, profitable and sustainable agricultural, food, fishing and forestry industries. Its policy priorities include facilitating agricultural productivity alongside increasing trade and market access, while ensuring sustainable resource management. The Department of Environment and Energy develops and implements policies to protect and conserve the environment, water and heritage and promote climate action. The Department of Foreign Affairs and Trade is responsible for providing advice on trade, foreign and development policy to government. One of their trade priorities is to pursue further trade liberalisation. The Department of Health is responsible for health policies that promote good nutrition and the prevention of chronic disease.

I have merely provided a snapshot of some of the many government departments who have policies in place that affect who eats what, when, how and with what consequences (Lang et al, 2009). However, it?s clear that priorities are widespread and diverse. From environmental and economic, to health and social – is one more important that the other? Should some priorities take precedence over others?

Currently it is fair to say that a macroeconomic lens frames the development of a lot of food policy in Australia. The National Food Plan which was developed in 2013 (and was subsequently archived when the Liberal National Party took over the seat of power), was Australia?s most recent attempt at a joined up food policy. It had four policy priorities and boosting agricultural productivity and expanding exports globally were paramount to the plan. For a fantastic overview of the history, development and key priorities of Australia?s Food Plan, I recommended checking out pages 79-82 in the Blueprint for a National Food Strategy.

It?s important to acknowledge that the image presented above is an extremely simplistic representation of a complex process. Food policy is often referred to as contested space and is as much about the actions of governments as it is the inactions (Harper et al, 2009). The interactions that take place between state, supply chain and civil society actors set the stage for the production of food policy. Just like actors on the big screen, they all play their own part, some of whom receive more of the limelight and accolades than others. These actors play a key role in food governance and their level of power and influence in contributing to the policy direction varies considerably dependent on a number of factors. It?s been highlighted elsewhere that supply chain actors possess a lot of power in the policy making process (Carey et al, 2015) and greatly influence how policy is formed beyond the state (Cullerton et al, 2016).

As you can see, food policy is multi-sectoral and multi-disciplinary which makes coordination complex. Yet this fragmented approach often results in dealing with issues in isolation without looking at the bigger picture. While agriculture provides food, it is also a major contributor to greenhouse gases, agrochemical pollution, biodiversity loss and soil degradation. Despite the presence of a safe and abundant food supply in Australia, approximately 31 per cent of the burden of disease is largely attributed to preventable diet related diseases that cost in excess of $27 billion, 36 per cent of the national budget expended on health. Climate change presents a significant challenge for Australia?s food supply. Many are concerned that climate change will negatively impact agricultural production, thus future export growth, resulting in economic implications nationally, highlighting the externalised costs of food policy.

The need for a joined up food policy is emphasised by the necessity to control and reduce the incidence of diet related diseases, alongside delivering an environmentally sustainable food system that fosters social inclusion; while at the same time retaining a viable industry which includes trade, production, agriculture, distribution and manufacturing. One way of doing this is to establish a lead agency that coordinates the development of national food policy. This was attempted for the National Food Plan; however, representation was grossly inadequate and limited to 13 members. The Blueprint for a National Food Strategy highlights the need for a principal agency to manage engagement and action, and coordinate the enormous task of integrating environmental, health, social and economic goals. I believe that if a national food advisory council was established it could frame policy options in a more integrated fashion to contribute to a?healthy, equitable, economically viable and resilient food system . Certainly it?s time that we connected the dots.

What do you think would work? ?Let me know in the comments below.