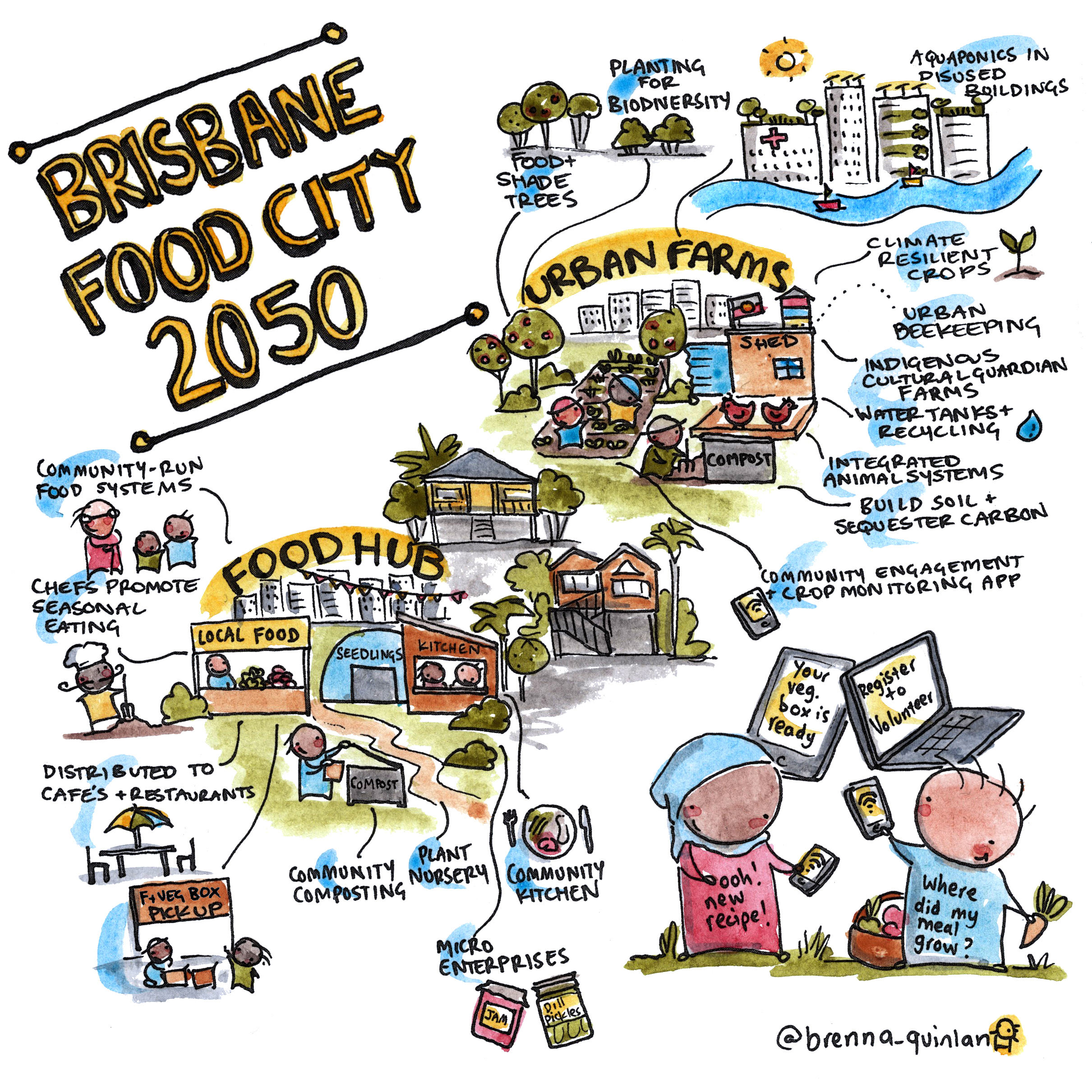 Brisbane Food City is the work of myself, Ellia Guy, Catherine Simpson and Nick Stein who, together with a larger stakeholder team, submitted an application to the global Food System Vision Prize, spearheaded by The Rockefeller Foundation.  The prize is $US200,000 and the 10 finalists will be announced in just under six weeks, on the 3-7 August.

Our vision sees a network of indoor farms complement regenerative market gardens, spread across the 190 suburbs of Brisbane City Council.

Its primary aim is to transition Brisbane s food supply away from a model that is centred on a complex, carbon intensive, unjust food system, to one that is sustainable, equitable, community driven and climate resilient.

The new, local food system is connected via strong community connections and a citywide technology platform. Farmers would be paid fairly for their produce and their role in the food system would be visible, valued and respected by their local community.

While our vision is focused on what Brisbane s food system will look like in 2050, we know that we can bring our vision to life right now. If you’d like to read more on Brisbane Food City, you can do so here.  Below is an exert written by Ellia Guy, for our application.

For some, the shift started with the first local tomato they bit into, fresh off the vine. Juicy and sweet, still warm from the sun that had been powering it…

For others, it started with watching Queensland Blue pumpkin seeds push up through the soil, strong and determined, unfurling themselves with startling veracity.

Others remember exclaiming when they realised that the red onion they had just picked up, the skin crackling slightly under their fingers, had been grown  …in that field down the road ! I didn t know we could grow onions here!

The shift to this richer, more deeply connected version of life began slowly. Slowly, the shiny veneer of plastic packaging and year round oranges began to lose its sheen. The fluorescent lights in the supermarket, and the yelling, all-in-caps signs started to become unbearable.

Then, a small farm appeared, next to some scrubby bush, in one of the oldest suburbs of Brisbane. The farm sat on a patch of land that had been a chip factory, and before that, a dairy farm, and before all of that, for as long as the land could remember, it had been a natural clearing next to an ancient track that led up the mountain to the place of the honey bee dreaming.

It was not the first farm in Brisbane. In fact, it was only there because others had come just before it. These farmers, picked up a thread, reimagined the future, nurtured conversations and dived in. Because of them, this farm took root.

The farm grew from the energy of our local community and the strong, deep desire that ran through us all for something more. We had lost something, on a long and twisting road, dropped our rituals, our ceremony, our knowledge of the plants. We had our lost seeds and the slow, steady rhythm of the seasons. And somewhere along the way, we had lost our sense of direction. But here it was, a small farm, in the middle of the city. It appeared like some kind of wayfinding signal and we used it to find our way back to ourselves, the land and each other.

From this farm, and the ones that came before, others grew. Stories of pulling beetroots from rich soil and what it felt like to harvest asparagus spears with a fresh snap were passed around like folklore. The tug of the soil, the promise of seeds and the enlivening energy of new friendships pulled us out of our houses and down to these landscapes that brimmed with life and possibility and hope.